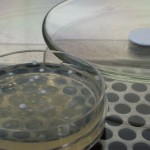 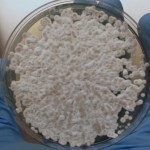 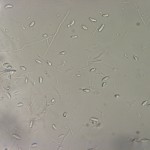 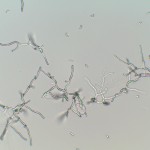 Pseudogymnoascus destructans is a psychrophilic fungus responsible for white-nose syndrome in bats. Named for the white mycelial growth on the skin of the muzzle, ears, and wings, WNS usually presents itself during winter, while bats are in a state of hibernation. During this torpor, the suppression of metabolic activity of the bat reduces energy expenditure, enabling survival through the winter until environmental conditions improve. Along with this comes reduced immune system function, leaving bats unable to adequately fight off this infection. In addition to physical damage by the fungus from colonization of tissue, the infection also affects water retention, provokes more frequent arousal, and increases energy use that prematurely depletes fat reserves, leading to high mortality among the infected.


A pseudo-colored scanning electron micrograph of Pseudogymnoascus destructans grown on minimal media for 30 days. The area of interest is the joined conidia, which is an example of the micro-conidiation cycle that P. destructans undergoes (© John Neville, Georgia State University)

P. destructans spores can remain viable in host-free environments for extended periods of time. Repopulating a WNS-affected cave with bats has the potential to facilitate infection of the new colony. In addition, the physical inaccessibility of many parts of caves where bats hibernate make developing disease management solutions a significant challenge. Our research focus is to develop methods for disease treatment and prevention that are safe for both bats and the environment, and can overcome the difficulties of working in karst environments.


Special Bacteria Helps Heal Sick Bats was produced in 2015 by National Geographic. It documents the first successful treatment of white-nose syndrome, by our research group and collaborators, and the release of those treated bats back into the wild.


Battle For Bats: Surviving White Nose Syndrome was produced in 2013 for the USDA Forest Service by Ravenswood Media. It shows how government and private agencies have come together to search for solutions to help bat populations.

We are currently investigating novel and efficacious methods for biological and chemical control of P. destructans. Further study is needed to establish effective and safe treatment regimes as well as potential collateral impacts. However, initial testing has yielded positive results.

Rhodococcus rhodochrous strain DAP 96253 is a strain of bacteria with unique metabolic activity. It was originally discovered by Dr. George Pierce and developed at Georgia State University for its ability to delay the ripening of climacteric fruit, after the bacteria underwent an induction process of being grown under specific conditions (as per the methods of Pierce et al., 2011). Interestingly, the delayed-ripening effects were being elicited without the fruit ever being in direct contact with the bacteria- they merely needed to share the same air-space. It was also observed that there was a lower fungal burden on exposed fruit. After a range of susceptibility tests, it was found to posses antifungal activity. We are currently investigating mechanisms behind the mode of action as well as application methods.

Antifungal volatile organic compounds (VOCs), VOC formulations, essential oils, and other compounds are also being investigated for their ability to inhibit fungal growth.

Development and testing is underway on a device to modulate dispersal of these compounds (patent pending, 62/036497).

One iteration of the device, with the controller (left) and the complete system (right) with battery, controller, and nebulizer compressor housed in a weatherproof case (© Kyle Gabriel, Georgia State University)